THAILAND: The essence of your dream travel 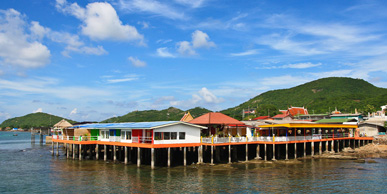 Thailand, a country priorly known as Siam is officially known as the Kingdom of Thailand and is situated at the centre of the Indochinese peninsula in Southeast Asia. Being the 50th-largest country, it constitutes of various distinct geographical regions. The centre of the country is influenced by the Chao Phraya river valley, which flows into the Gulf of Thailand. The Andaman Sea is a precious natural resource as it hosts the most popular and luxurious resorts in Asia. Phuket, Krabi, Ranong, Phang Nga, and Trang and their islands, all lay along the coasts of Andaman Sea. Thailand's climate is impacted by the monsoon winds that possess a seasonal character and hence most of the parts of Thailand have a tropical yet dry climate. Thailand's natural religion being Theravada Buddhism is culturally very diverse with an ancestral spiritual touch to itself. Thai cuisine being deliciously appetizing blends five fundamental tastes including sweet, spicy, sour, bitter and salty. The staple food of Thailand is Jasmine variety rice which comprises a part of every meal. Thailand is an ideal tropical destination. A holiday in this exceptionally spiritual country will help you attain your inner peace with relaxing therapeutic treatments in renowned spas, along with yoga sessions that aid in balancing the mind and body along with a sumptuous nutritious diet. Thailand is also known for Mua Thai boxing or Thai boxing which is a combat sport of Thailand that makes use of stand-up striking along with various clinching techniques. Thailand is an ideal place to shop from as it provides a wide range of options to choose from for different kinds of shoppers. From the gleaming chrome and towering size of modern, air-conditioned malls, to the hustle and bustle of its famously buzzing street markets. Bangkok has all kinds of places to blow your minds. Ranging from antiquities to the most amazing pair of trainers to the most aesthetic designer jewellery available. Every year, thousands of travellers soar to Thailand in pursuit of luxury, pampering, and relaxation. One of the highlights of your visit to Thailand is experiencing the unique style of body therapy known as Thai massage. Thailand has a long and impressive history of traditional massage, a therapeutic practice with origins in Chinese and Indian medicine. Many Thai people use massage on a regular basis as part of their general health regime to relieve stresses and tensions.

Bangkok, Thailand's capital, is a huge city known for its ornate shrines and vibrant street life. The Chao Phraya River hosts the Grand Palace and the sacred Wat Phra Kaew Temple, flowing through its canals past the royal district of Rattanakosin. The enormous Buddha stands next to the Wat Pho Temple. The culture of Bangkok reflects its position as Thailand's centre of wealth and modernisation. Thai Airways, British Airways, Eva Air being direct flights to Bangkok and Emirates, Cathay Pacific, Qatar and Etihad having one stops in between provides easy flight booking experience for travellers to make the most of their trips.

Pattaya is a city on Thailand's eastern Gulf coast well known for its beaches. The village which once used to be serene and tranquil is now lined with luxurious hotels, bars, shopping malls, and clubs open 24*7 for you. The beauty of this place is embraced with the Wat Phra Yai Temple which features an 18m-tall golden Buddha enhancing the ambience of the city.

Phuket is an island, mountainous and beautiful is situated in the Andaman Sea adorned with beaches situated along the western shore. This island is home to many lavish seaside resorts, restaurants and spas. Phuket City, the capital, has old shophouses and busy markets. Qatar Airways and Cathay Pacific airlines fly to and from Phuket to help travellers explore the beauty of Phuket.

Koh Samui, Thailand's second largest island, lies in the Gulf of Thailand off the east coast of the Kra Isthmus. It's famous for its dense coconut groves, palm edged beaches and the landmark of 12m-tall golden Big Buddha statue at Wat Phra Yai Temple which is located on a tiny island connected to Ko Samui by a causeway. Cathay Pacific Airlines helps connect this destination to the rest of the world and make convenient trips for travellers.

Krabi, the capital of southern Thailand's Krabi Province, is a town situated near the Andaman coast. On a hilltop elevated by stairs, the Tiger Cave Temple is a Buddhist site with panoramic views. Andaman Sea destinations like the Phi Phi Islands are accessible by ferry. Thai Airways and Cathay Pacific airlines provide amazing deals for explorers to visit the land of Krabi and delve into its beauty.

Chiang Mai is a city in mountainous northern Thailand. It's Old City area still possesses fragments of walls and moats from its history as a cultural and religious centre. Numerous extensive Buddhist Temples are hosted by Chiang Mai including the Wat Phra Singh And Wat Chedi Luang temple.

Hua Hin is situated on the Gulf of Thailand, in the southern Thai province of Prachuap Khiri Khan. Once a quiet fishing village, it now has grown into a popular escape for residents of Bangkok. Hua Hin Beach is admired for kite surfing and other water sports and is the main stretch of sand, fringed with high-end hotels and seafood shacks. There are numerous flights like Etihad, Thai Airways and Cathay Pacific which flies from different places to Hua Hin to let the travellers escape the chaos of life and settle for the best.

So, book your reservations now and savour the aura of Thailand today because what is life without a tinge of travel in it?

For a free callback, enter your number below and we will call you within 5 Seconds.

X Would you like a free callback in 5 Seconds.

To continue using this site, please enable cookies in your web browser.

We don't support landscape mode yet. Please go back to portrait mode for the best experience

Get in touch with our travel executives and get your hands on deals on your preferable travel dates, regional departure and attractive fares on airlines and hotels. Best Price Guaranteed.